Kaitlyn is a 26 year old piano teacher who started a private studio in downtown Atlanta. She also worked as a public school teacher.

Kaitlyn grew her studio by 60% in 3 months and created a marketing funnel. This gave her the confidence to leave her teaching job in a public school.

This is the message I received on Facebook from Kaitlyn Davidson on February 20th of 2016.

As I began to talk to Kaitlyn, I learned that she taught music in Atlanta’s public schools.

She had a small studio of students that she taught “after hours” and on Saturdays.

She wanted to make the jump from public teaching to private teaching.

“I want to hire you as my business coach.”

This is the story of how Kaitlyn was able to leave her job and begin her journey towards starting her own music school.

When she graduated from college in 2013, Kaitlyn took a job teaching in public school. She felt it would help her become a better teacher.

This would be helpful since her long-term plan was to start a music school in Atlanta.

She also took a job teaching piano at a Steinway store in Atlanta in 2014.

The situation was less than ideal. They took a large percentage of the tuition….and this was even after they charged below market rates. They gave parents discounts on tuition for buying a piano. They took that discount out of her pay!

In January of 2015, Kaitlyn resolved to find a place to teach on her own.

After an enormous amount of work, Kaitlyn found an office to rent. She set up her studio and began attracting new students in the summer of 2015. 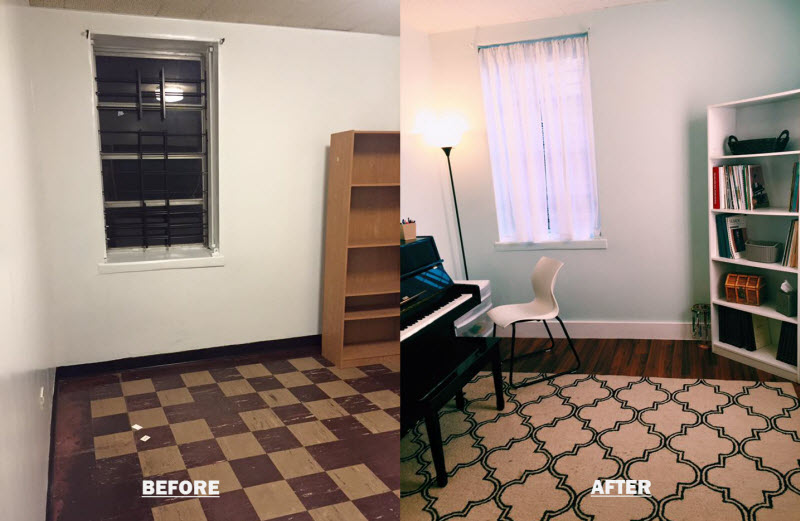 Kaitlyn had a goal to be out of her public teaching job by the end of the 2017 school year. She figured that a year and half would give her enough time to reach the 50 student mark.

As the 2015-2016 school year wore on, she felt trapped. She had over 700 students and the school system kept changing her school assignments.

“It started to become unbearable.”

She was desperate not only for information but for support.

“A lot of people were discouraging. They either gave me bad advice or told me these horror stories about private teaching that were demotivating.”

It was around this time that Kaitlyn and I met.

“The timing was perfect”

I met Kaitlyn in December of 2015 on the “Piano Teachers as Business Owners” Facebook group. After a few converstaions, I offered her some advice about Facebook marketing for piano teachers. We didn’t speak again until after my blog launched.

After this site launched, she contacted me again in mid-February. She was quite insistent that I help her get out of her teaching job.

I later asked her why she was so emphatic. Her response:

“The timing was perfect. I knew in my heart that I wanted to work with you.”

I told her that I would work with her on two conditions:

With that understanding between us, we began to work on several goals:

We began working together the last week of February 2016.

Kaitlyn was already working 14 hour days. She got up at 5am each morning and taught school until 3p.

Then she traveled to her studio where she taught until 7pm each night.

On top of this, she now had to spend several hours each night working on the assignments that I gave her each week. And in the middle of this, she had already committed herself to purchasing a home, which she closed on in April.

Together we transformed her website from a boring “information junkyard” into a persuasion power house.

We then began to get to work on her first marketing campaign. We focused her efforts on Facebook and Google AdWords. The results she began to see were astounding.

Here are just a few excerpts from Facebook Messenger conversations we had: 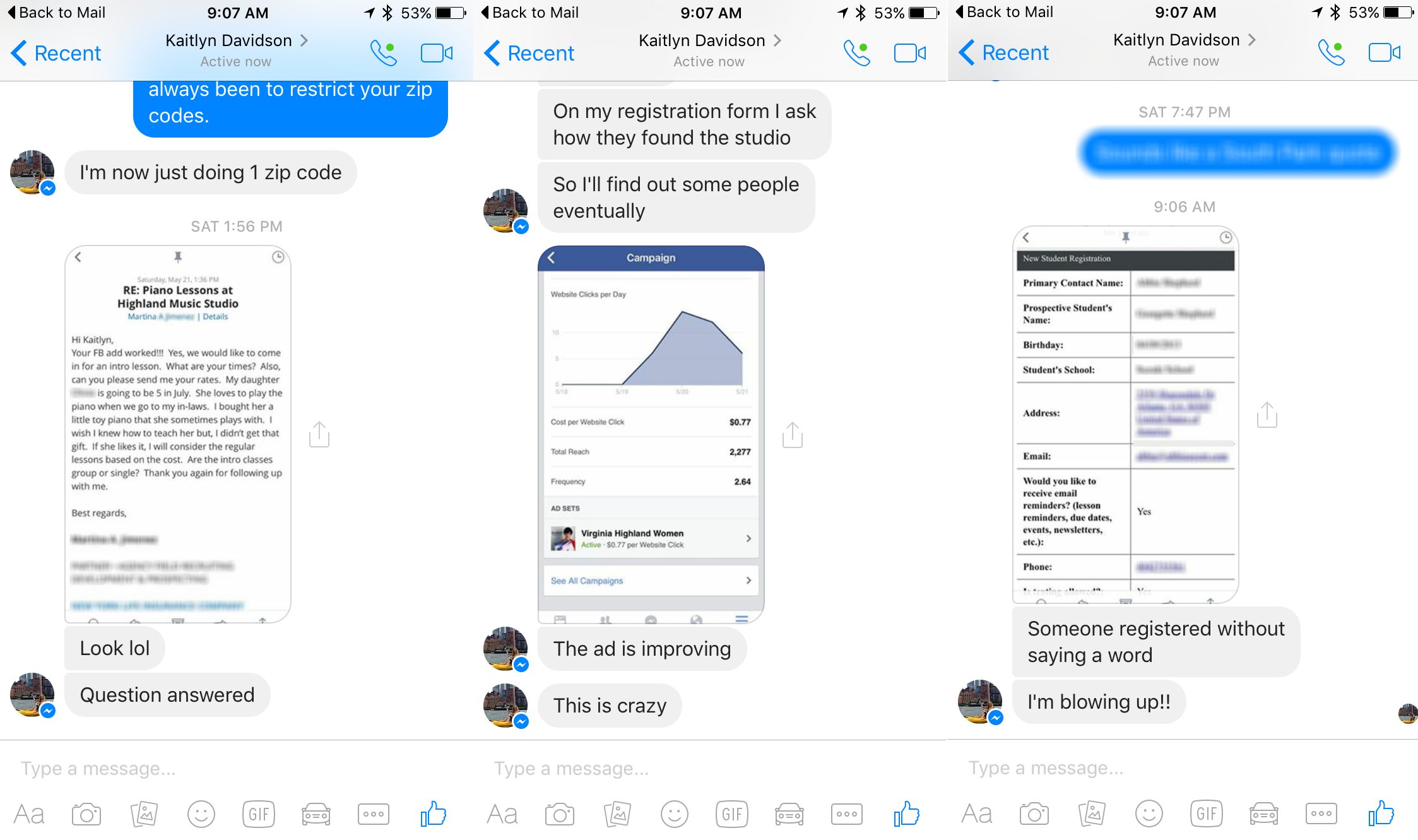 After six weeks working with Kaitlyn, a chance-text conversation between us made me think.

Kaitlyn lamented that she was getting so many requests for adult lessons from young professionals.

She was primarily focused on signing up new children in her studio.

I began thinking about the problem. I knew that this might be an opportunity to help her make a leap forward towards her goals.

In general, it is always a good strategy to use creativity to convert problems into big wins.

I looked at her unique strengths and abilities. I came up with an idea for a unique adult program for Kaitlyn to use in her studio.

Not only would it take less time for her to “deliver the product,” my customer marketing plan meant that she could charge more.

The fact that it would require less time was a big draw for her. She was already working 15 – 17 hours a day!

I suggested to Kaitlyn that we charge 40% more for this adult program. This was already on top of her quite aggressive rates for her area of Atlanta.

Kaitlyn’s reaction: “I was skeptical at first. I didn’t think anyone would pay that much for lessons.”

I gave her some pointers on how to market this. She went to work writing marketing copy for her Web site. She also developed an outline for how she would talk about the program on the phone and in person.

She landed her first client for this new program within a week. 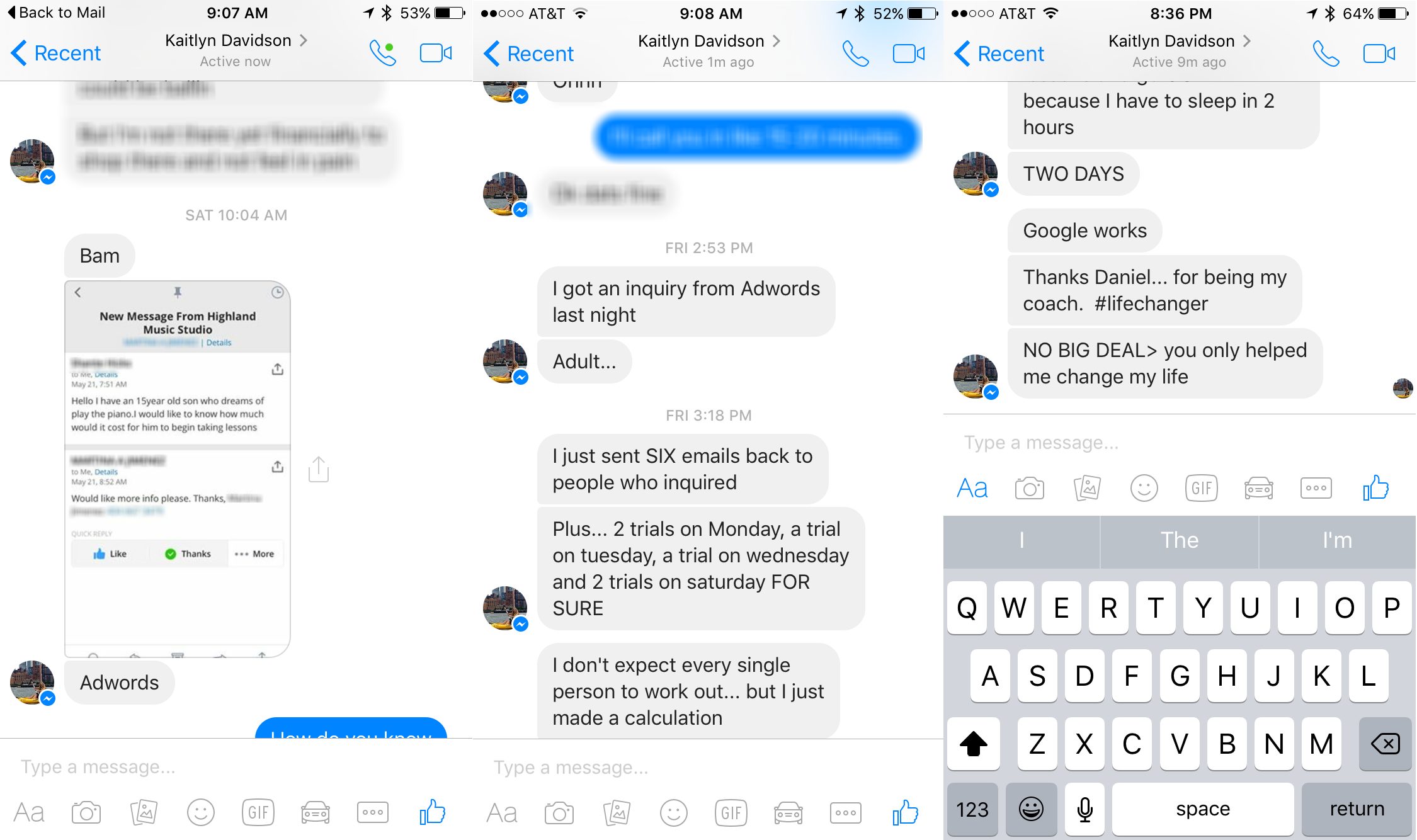 Kaitlyn’s goal was to feel ready to leave her job by July of 2016.

However, as she gained a new sense of vision and confidence, her internal clock “sped up.”

During our weekly sessions and conversations between sessions, Kaitlyn became increasingly convinced of two things:

This was a huge step for her.

But, she turned in her resignation letter one week before the end of school in May. 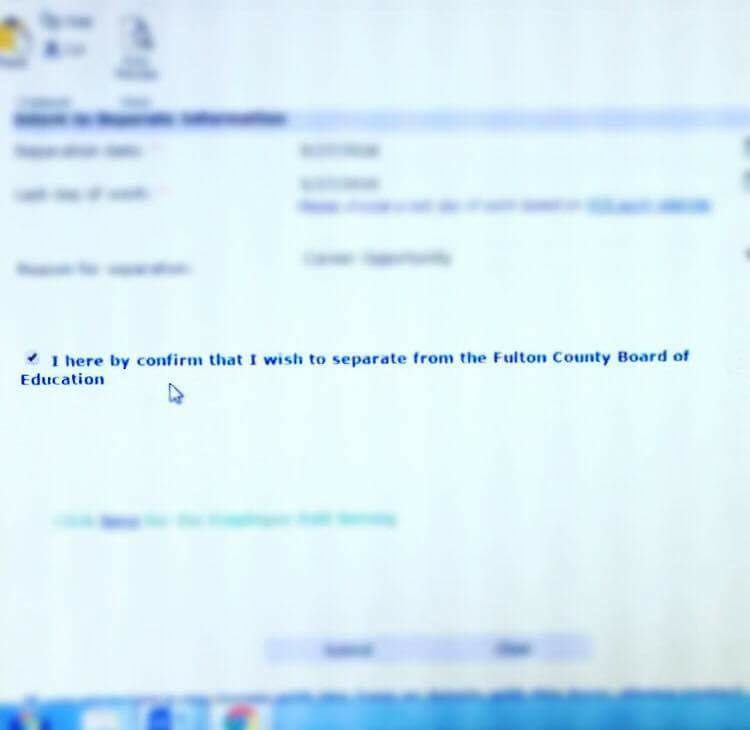 In just twelve weeks, she managed to:

Best of all, her work load has dropped significantly. Now that school is out (forever!), she is working just 18 hours per week.

What We All Can Learn From Kaitlyn

After we reached the halfway point in our time working together, I asked Kaitlyn what she discovered in our first 12 weeks working together. The lessons she learned are applicable to anyone with a studio – big or small, new teacher or experienced.

#1 Don’t Underestimate How Much People Will Pay You

Kaitlyn experienced a paradigm shift when that first adult signed up for her new adult program.

“It blew my mind when someone signed up for the adult program.”

We worked on her copy and marketing emails. She used these when anyone contacted her about the program.

She got that confidence from understanding her customers, whom she surveyed in the first two weeks that we worked together. 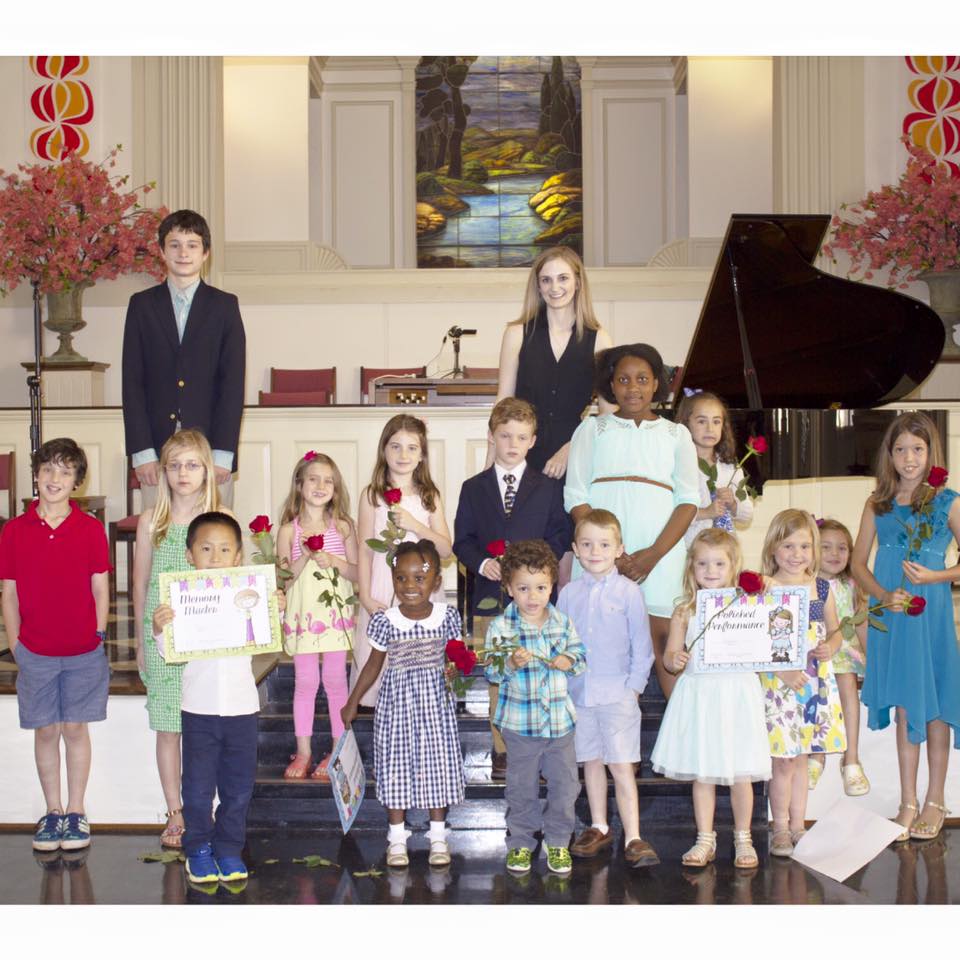 #2 You Have To Get Through Pain To Get Somewhere Worthwhile

She was working upwards of 70-80 hours per week.

She eventually realized that she was going to have to surrender her personal time for a season, so that she could have the life that she wanted.

She was investing time, money, and enormous personal energy to build the life she wanted.

Kaitlyn’s work inspired me to show up for her every week. It generated an enormous amount of empathy, respect, and investment inside of me.

#3 Everyone Needs Support and Direction

This shouldn’t come as a shock to anyone. We’re teachers!

Students come to us for support, instruction, and encouragement.

Why wouldn’t we need that same support in the areas of personal growth, development, and business?

I asked Kaitlyn what her favorite moments have been so far in working together:

UPDATE January 2017: Kaitlyn decided to work with me again… to help her get a new premium program started in her studio. Kaitlyn started a new group program for beginning students. This helped her increase enrollment to 75 within a few months.

“I think everyone should have someone to talk to…

…I would just now be getting around to reading a book on business this summer. I wouldn’t have made it this far.”

Kaitlyn started in a position of strength… incredible self-determination and perseverance.

However, the overwhelming amount of information out there confused her. She didn’t know where to begin. Grow Your Music Studio helped her quickly create a plan and execute that plan.

Grow your studio, attract quality students, raise your rates, and more… what change do you want to make?
The following two tabs change content below.