These posts usually boil down to one of three types:

Today, I am going to show you how I went from monthly battles with parents about a makeup policy to only 2 “mild” run-ins about my policy IN ALL OF 2014 AND 2015! (not a typo)

Usually I would start a post with a prolonged section that explains the reasons why the topic is important.

I’m going to forego that this time.

The makeup lessons policy is a huge point of debate, frustration, and even anger in the private teaching and music school community.

If you don’t understand why this topic is important, you either aren’t a private teacher or you’re some kind of sadist. In either case, you will probably want to stop reading now.

For the 10,000 other teachers that are reading this right now, set aside about 10 minutes of your time, because…

This is going to be a post for the ages. Today is the day that piano teachers WORLD WIDE will never again worry about or have to be angry about makeup lessons.

Furthermore, I suggest that teachers and music school owners alike read this article –  even if they don’t allow makeup lessons in their studios! Regardless of your policy’s position on makeups, there is a concept contained in today’s post that you should know about. The perceived value of your lesson program is at stake here, and I want you to be well educated!

UPDATE: Several teachers made a helpful distinction. There is (technically) a difference between a make-up lesson and a reschedule. For the purposes of this article, think of a make-up as any lesson that a parent wants – whether they have rescheduled it properly or not. 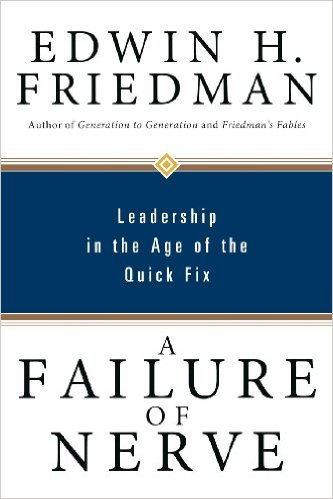 Since graduating twelve years ago, I have read tons of books. I took copious notes on many of them. Many of them were of outstanding quality. Books on business, psychology, parenting, religion, politics, history.

However, if you asked me right now my #1 book recommendation, I would not hesitate.

It is A Failure of Nerve: Leadership in the Age of the Quick Fix by Edwin Friedman. Though it is not an easy read, it is well worth taking time to read this book.

This book has profoundly impacted my piano business, my marriage, my social and familial relationships, and my piano teaching.

Friedman was a counselor to Presidents. He was a student of Dr. Murray Bowen, one of the most influential psychiatrists and therapists of the 20th century.  Shortly before he died, Friedman wrote A Failure of Nerve. He deemed it the summation of all of his ideas and life work.

This book is not quickly summarized. Nevertheless, I will make an attempt.

His working thesis was that America has a pervasive crisis of leadership at every level. From CEOs of industries and presidents all the way down to parents and even piano studio owners.

In short, he said that

This might sound about as clear as a muddy river right now, but if you will permit me, I am going to bring this all home by the end of this article.

Triangles – No, Not the Ones You Play in Band

Let’s take a common situation from many studios and music schools around the world.

Sally Student wants to try out for the swim team. She completely forgets that the mandatory orientation meeting is on Tuesday after school – the same day as her piano lesson.

On Tuesday at 2:15pm, Teresa the Teacher gets a text from Sally’s mom. Sally’s mom cancels the lesson just hours before Sally was supposed to come in for her appointment.

“We’re so busy! We totally spaced this!”

Several days later, mom sends an email and asks when they can make that lesson up – despite the fact that she signed a registration form that stated that there are no makeup lessons for last minute cancellations.

How do most teachers react in this situation?

Some teachers give in. Others lose sleep due to anger, frustration, or self-loathing. Tears might be shed.

Whatever the case, there is a sense that you are not valued and that your job is difficult.

Well, I will tell you something. You have become the victim of what Friedman calls an “emotional triangle”.

I will explain with this graphic: 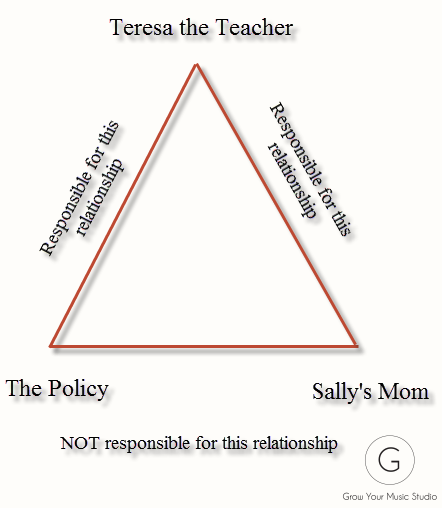 Friedman suggests that stress arises when you are put in a responsible position for someone else’s emotions, feelings, or life decisions.

She is not – however – responsible for mom’s relationship to the policy!

By putting pressure on Teresa, Sally’s mom is trying to avoid her own anxiety and conflict with the policy.

This is called sabotage. Teresa has become the victim of emotional sabotage, and is being pressured to let the least mature member of the triangle set the agenda.

This problem becomes even more difficult for Teresa if she really likes the student, is dependent on the income, or had a bad enrollment this fall. In such a case, Teresa might even give in to maintain the relationship or to pay her mortgage.

This emotional triangle happens to thousands of teachers every month around the world. It is not pleasant.

Keep reading, because I’m going to show you to solve this problem – both emotionally and in your policies.

How Should We Solve The Makeup Lessons Problem?

When any teacher experiences a similar situation, there are a common set of responses:

Solution? Some teachers feel that if they just had the “right words” or “right policy” that this would become less of a problem

Reailty: It won’t. The emotionally immature are notoriously invulnerable to insight, reason, and logic.

Solution? Some teachers will counter the parent with emotional pleas, explaining how they need this tuition money for bills, mortgage, or rent

Reailty: This is actually counter-productive. In that situation, you are trying to force Sally’s mom into a responsible position for YOUR BILLS! You are doing the exact same thing to her that she is doing to you. You are triangling her! Not only is this immature, it is perpetuating the dysfunction in the relationship.

Solution? Other teachers bend over backwards and work long hours or weekends to fit in these makeup lessons

Reailty: You are doing no favors for yourself, your family, your clients, or your happiness by taking this route. There is a better way.

Reailty: While I respect this move, I think it misses a huge opportunity to serve your families. You can propel your studio and reputation into “legendary” status by using a little ingenuity to overcome the problem.

How do we overcome this problem?

There is an inner game and outer game of solving the makeup problem.

Inner Game: How to Grow a Spine of Steel

The advice I have to give comes straight from A Failure of Nerve.

If you feel uncomfortable enforcing your policy, it is because you have become emotionally fused with something. You are over-valuing something. There is something that you cannot or will not let go.

Whatever the case, the answer cannot be “just try harder.”

Learning where you are vulnerable is important. However, information and logic has never been enough to get people to change behavior.

We both know human emotions don’t work that way. Emotions are like habits – and habits can be hard to change.

Nevertheless, teachers must detach themselves from their studio, their income, and their students.

Fear and pain are powerful motivators. It will take effort and practice to overcome your desire to give in to this kind of pressure.

Be aware though… it is the best for everyone involved: teacher, parent, and student.

Outer Game: How I Reduced Admin Time, Conflicts, and Awkward Situations With a Simple Fix 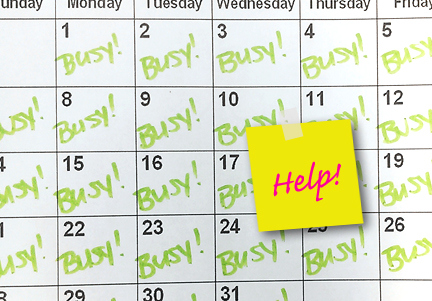 In early 2010, I had about 50 students in my studio. Because of some instruction format changes, I was able to increase my student load to 70 students that fall.

It soon became apparent that my old system for scheduling makeup lessons was not scalable.

I was spending hours each week trying to fit in makeup lessons. I was calling parents, emailing parents, and playing phone tag. It was a mess.

On a particularly bad week, I was ready to throw in the towel. I set aside some time to brainstorm the problem. Here’s what I discovered:

I was the single point of failure in the whole system.

I was the gatekeeper to getting what parents wanted – that is, a makeup lesson. Therefore, I was the easiest person to blame.

As I stared at the ceiling, I realized that whatever the solution, it needed to remove me from the equation. I needed to put pressure back on parents to solve their own problem.

The solution that came to me almost instantly transformed my studio.

“What’s the correct policy? How do I force parents to agree with me? What should I say to persuade people to my viewpoint?”

I didn’t want to go that route. It would be easy to write something dishonest that makes you feel good temporarily.

I’d rather address the real problem and help teachers begin making progress on showing real leadership in their studios. That is why I showed you the triangle.

In The 7 Habits of Highly Effective People, Steven Covey says:

“Every public victory is preceded by a private victory.”

It is “style without substance.”

By understanding and identifying these emotional triangles that occur in our studio, our families, and our society – we are well on our way to becoming happier, more stable leaders.

UPDATE: Part 2 of this post has been published. Find out how I solved my piano makeup lesson problem.